I went to a Guernsey County Historical Society meeting yesterday. I am excited to say, I am a soon-to-be member. What a great group of people we have dedicated to preserving our history. I also managed to get a copy of “A Brief History of Guernsey County, Ohio” by Russel H. Booth Jr. It’s a great book and it’s the only book published about Guernsey County History that I didn’t already have in my collection. You can get one from the

society for a measly $10 bucks. I’m telling you that’s a steal for a history book. I’m currently in College and I’m telling you history books are not cheap, especially history books concerning local history.  They’re great to have though, without them we cannot pass our history off to the next generation. So you want one of these, if not just to put up somewhere and preserve for your children and one day your grandchildren. However, there is a limited number of these available, so if you want one you’d better grab one soon because once they’re gone, they’re gone. The society also agreed to join an exciting region wide program, that will allow you to buy a pass for 4 people for $25; this pass will give you access to a laundry list of Museums around the area. What museums that will include,
hasn’t been determined just yet, but I promise I’ll keep you guys up to date as the flyers become available. Okay so enough about my meeting with the society let’s talk about the Museum.

On July 4th, 1826 Americans celebrated the 50th Anniversary of the Declaration of Independence. It was called the nations Jubilee. Following the celebrations news quickly spread—quick by their standards not ours—that something divine had happened on the day of the Jubilee. Americans had celebrated this monumental occasion oblivious. They celebrated without knowing on the same day, two of our nation’s greatest men had struggled and held off death until they had been told it was in fact the Fourth of July. Two demigods of American history: John Adams and Thomas Jefferson, had died almost simultaneously whilst everyone in Guernsey County was ringing their town bells, shooting off cannons, and gathering around bonfires. John Quincy Adams, son of John Adams was finishing his first and only term as our nations President. Like his father, he was exhausted with the office and ready to move forward. Our museum has a land grant signed by Mr. Quincy Adams in the research room.

John Adams (Left) and Thomas Jefferson (Right) both died on July 4th, 1826, exactly 50 years from the signing of the Declaration of Independence.

I tell you this story to give you perspective. Shortly after the nation’s jubilee, less than a year later in 1827, a man named William McCracken finished building a house in Cambridge on Steubenville Avenue. It’s likely he was either preparing or in the middle of building his house during the Jubilee. Mr. McCracken and his family owned the house until after the Civil War, in 1871 when a local

Presbyterian pastor, William H. McFarland and his wife Jemima Hanna, bought the house, where they resided for the remainder of their lives. In 1915, the Lusitania—an American passenger ship leaving England—was sunk by a German U-boat leading us into World War I. In that same year, the McFarland family moved the house from Steubenville Avenue, to 8th Street where the house sits now, not but a block behind the Courthouse and the Guernsey County Library. On July 3rd, 1963—136 years after it was built—the house was donated to the Historical Society by Jeannette McFarland, the daughter of William and Jemima McFarland, to house the Guernsey County Historical Society Museum. Much work has been done to the house to both preserve its history and preserve the great history of Guernsey County. 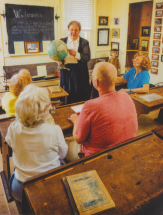 I had never been in the museum, I was given a great tour by the curator Judy. They have done an outstanding job at taking this old house and turning each room into a different experience. There is an exhibit showing you a Victorian bed room, with authentic dresses from the Victorian era. There is an exhibit showing you what it would feel like to be in a one room school building, which for many of generations for citizens of Guernsey County one room school houses would have been a huge part of growing up. There is an outstanding Coal Mine Exhibit, where you can view many pictures of the different Coal Mine operations that filled our area and helped provide the wealth needed to build the communities we were left with by our Ancestors. Which brings me to my next point.

What I plan on doing for the society. I am going to embark on a series of essays focusing in on the topics that you can find at the museum. I’m going to do one on the Gilded Age wealth of Guernsey County, the history of our local schools, and I’ll do one on the Coal mines that help build our surrounding towns. I also plan on doing a sneak peak, virtual tour video to go along with these essays. However, I can promise you all, the history of this house is something you have to feel for yourself. Words on a paper, pictures, and videos cannot substitute for actually being in the house and feeling the history yourself. The Museum opens Memorial Day, May 30th and remains open to the public through December and though that’s not for another 2 months, if you can get a group of people (15 give or take a few) to go with you, they will give you a tour before then. I encourage everyone, at some point this summer, to take the time to go check out the Guernsey County Historical Society Museum and share this with your friends so they don’t miss out either. And remember to snag one of those books for $10 bucks while they are still available!

You can learn more about the author by clicking here.